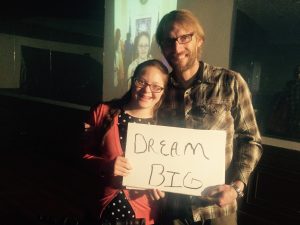 “I didn’t know you could learn something from a comic book!”

Those are the words my beautiful young lady told me today. As most of those that follow us know, I have written several books trying to use fiction to teach lessons about inclusion and diversity. I know it’s not a new concept, but we all have to have that mission that drives us to be better. For many of us that mission begins when we have kids and as I have stated before, my family is what drives most of what I try to accomplish in this world.

One of the lessons I have learned trying to advocate for people with intellectual and developmental disabilities is that no matter how well intended I might be, my message doesn’t always make it to those who matter. I have found that it’s not just a matter of marketing, but writing something that is age appropriate and attainable to everyone is a challenge. My latest project has been intended to help with that.

Eximius was intended to be a story that is fun and attainable for everyone. I say intended because I fully realize that good intentions don’t always equal results. After years of good intentions I am still striving to be better. In science (and in life) a theory is just the start; proof is something that comes after all of the work is done. I have been operating on the last three years under the theory that if I make a graphic novel, I can make something with a message that is more visually appealing and attainable for different reading levels.

I always thought this was a good idea, but yesterday I got confirmation. Literature is something that I am passionate about and our house looks like a used bookstore as a result. I try no to push things on my kids, but I can’t help trying to get them to read.

In my humble opinion, any reading is good, a great novel, a magazine article, the newspaper, a graphic novel, anything the keeps your brain working. People will argue that a graphic novel makes you use less of your imagination, but I would rather my kids do something enjoyable with their brain reading than nothing at all. In addition, there are some truly amazing graphic novels out there with great art and a great story that make me think as much as any novel ever has.

In an effort to get my daughter to read more I have thrown novels, magazines and graphic novels at her for years. I finally found one I thought she might do more than smile at me and leave somewhere in her room. A marvel graphic novel called “Ms Marvel” its about a Muslim teenager who gets superpowers. It’s not just a superhero novel but a statement about acceptance and diversity. Devon read a little bit of it and actually decided she might like to read the rest of it.

Six hours later Devon has finished the graphic novel with a smile on her face asking if we can get more of them. Being the crazy dad I am, I restrain myself enough so that it isn’t obvious that I want to run out and by them all right now. Then I hear “dad, can you learn something from a comic book?”

I know it doesn’t seem like much of a blog after a lot of the other deeper stuff that’s out there. Here is the deal, to be working on something you hope will be worthwhile under a premise that has not been proven. To believe you have a chance, and then be validated by your beautiful daughter is something that is hard to put into words. I still don’t know what is going to happen, but at least I know I am heading down the right path. Thank you Ms Marvel, every little bit counts I am very thankful for your message its being heard and I only hope to continue your work with my message.