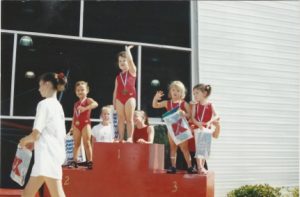 As most of you know I have a daughter with Down syndrome so we have become, through her, part of the Special Olympics community. As anyone knows when you have a friend or a family member who happens to have a “diagnosis” you tend have extraordinary hearing when it comes to conversations regarding that said “diagnosis”.

One of those time came over coffee listening to a conversation a couple was having regarding the difference between The Olympics and the “Special Olympics”.

The conversation came to a discussion of “what is the Special Olympics”? They then asked what it meant if someone was competing in the “Special Olympics”. The couple was very confused about the differences between the Para Olympics, Special Olympics, and Olympics. A well meaning participant tried to clarify by saying.

“In Special Olympics everyone is a winner, in the Olympics and Para Olympics they actually compete.”

It was one of those moment when you know some grave misunderstanding has just taken place and you feel your heart rate rising as you try to take stock of what has upset you. The people having the conversation weren’t trying to be mean, but they also had no idea.

Anyone who has ever been to a unified Special Olympics soccer match (or any other special olympics event) has seen the competition. Our last match someone was injured as a special olympics athlete dove with reckless abandon to try to save the goal. So as I am listening to the conversation I have visions of my daughter crying when they loose, and jubilant when they win. I am then filled with memories of the competing teams partner helping to the tie the shoe of one of our athletes in the middle of the game. As these memories are filling my head I am still trying to formulate what I want to say to help clarify my feelings as much as educated the people.

Sadly, I did not have answers to be able to explain my feelings during our coffee conversation so we left with the happy nods and the silence of a chance encounter that could have been something more. I was upset with myself, not just for not having corrected some miscarriage of justice, but because I couldn’t formulate a coherent thought to explain more thoroughly/completely. As we left, I am sure we had conversations and made plans, but I am at a loss to say what they were as my head was still working on the problem.

Later that afternoon my subconscious finally gave me an answer I could get my teeth into.
You see, in Special Olympics they are all winners not because they all get ribbons or medals. Nor is it because they all win every race no matter the place they finished. They are all winners because the have “won” the right to compete. For them being allowed to compete is a victory in its own right. When no one thinks you are capable of anything, being capable is a victory. When everyday is a struggle to do the things that come naturally to most of the rest of us, you count every victory by a new measure and you look at every task as a different challenge.

Having lived with my daughter Devon who is now 20 years old I measure my success in life by a different stick and can embrace life with a perspective that I will always be thankful for.