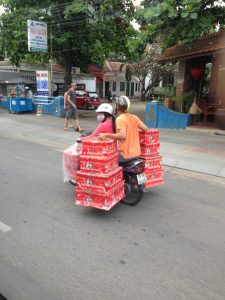 The “American Dream” is an ideal that those born in the United States and those who come here as immigrants are supposed to have. That means different things to different people; it isn’t the dream itself that is important, but having the dream. People who don’t have dreams or purpose tend to do poorly, or feel lost. Teenagers who have a dream or goal have a reason to go to school, push themselves and persevere.

One of the things as parents we have to do is foster those dreams. I know this sounds like an obvious thing to say, but it is often one of the hardest things about being a parent. Your kids are different then you and you may not be able to understand or even agree with what they want. The thing is, you still have to foster their hopes and dreams because having purpose is crucial to success. Success may mean different things to different people, but you will never be able to define another person’s success, or at least what it means to them.

What makes a successful society? The altruistic model of looking at a successful society would say that the mark of a great society is how they take care of their disadvantaged. The practical model would say that having every member of said society contribute in some way minimizes charity and adds to the stability. Globally, for a society to be successful everyone in that society has a role to play and in our society that means employment. Much has been written about employment rates as predictors of economic growth and the strength of a countries economy. In our time, employment isn’t just about a job, but having a purpose. Unfortunately, it has also been clear that the type of employment and pay vary greatly based on gender, race and zip code.

At this point, I suspect, most of you reading this are asking your selves why I titled this blog “The Great Equalizer”. To begin, we have to ask ourselves, what is the largest minority in this country, and the world for that matter. I will give you a hint, it is a portion of society that does not discriminate based on color, gender, or zip code. Since much of what I write about is disability advocacy you can correctly assume it is our disabled brothers and sisters that make up this minority.

While we talk about nationwide unemployment rates hovering around 5%, it is not an accurate reflection of all of society. In 2014 a study found that the number of people with disabilities in the U.S. who were actually employed was 12.9%. That isn’t unemployment, that is employment of people ages 18-64 who are classified as having a disability. What is also pertinent is that this rate isn’t affected by gender. In most studies, including US census data your employment opportunities are not affected by your gender if you have a disability.

This means based on the study, only 2.1 million out of 16.3 million (or about 1 in 8), civilian, non-institutionalized men and women with a work limitation, aged 18-64 in the United States were employed. This is really important because it’s not only hard on the individuals, but the Social Security and disability trust fund almost went bust in 2016, and was saved only by funds being diverted. Unfortunately, it is on track to go bust again by 2023. With more then 14 million people with a disability who aren’t employed collecting benefits, its hard not to believe this is important.

Even though most people with a disability receive some sort of governmental aid they still make far less money then their peers, and are more than twice as likely to live in poverty. We raise our children with hopes and dreams of what their lives will be like. After all, we live in the United States, home of the dream that regardless of the class you were born into, you have opportunity. No one wants to tell their child that they will likely not have a job and will live in poverty.

No matter what the family’s resources are, without social security, kids do not have access to job coaching or healthcare, as well as many other benefits. No matter what, this is currently one of the only paths in our country to independence for people with disabilities. To maintain their benefits, people receiving benefits from social security can only have $2000 to their name at any given time, forcing many of the people who may be able to work more to accept less work so that they don’t lose their benefits.

A purpose, we all deserve a purpose. Being employed gives people a purpose and has been shown to improve the physical and mental health of those gainfully employed. Thus not only is someone who has a purpose less dependent on the government, they are likely to be healthier and thus less likely to drain their healthcare benefits. “We hold these truths to be self-evident, that all men are created equal, that they are endowed by their Creator with certain unalienable Rights, that among these are Life, Liberty and the pursuit of Happiness.”