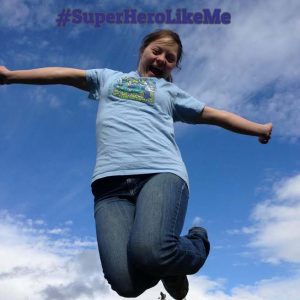 For most of us we grow up fantasizing about some superhero we read about in a graphic novel, or watched in a movie. Sometimes it was a book, or even a favorite toy that became real as soon as we had it in our hands. All superheroes have some power or something special that sets them apart. They can fly, or run, or have super strength. Superhero powers don’t have to be this cliche or obvious, but at the end of the day we fantasize about what it would be like to be a super hero. We run around the yard with our own private super hero held over our head dreaming what it would be like to fly. Sometimes we fall asleep at night thinking about how easy it would be to sneak down and watch tv if we had super speed or invisibility.

The thing about superhero’s is that we like being able to see ourselves in them. We may not look or act like them, but we can see ourselves enough that we can dream about being that superhero. Part of our psyche is believing that there can be someone fighting for good who is special out there who does things that we would do if we had powers. Everyone growing up needs a hero or superhero. Even though all heroes don’t have some superpowers there should always be someone that we can imagine making the world a better place. It is equally important that the person or being who is our hero is someone that we can visualize our self being. We can see ourselves as that hero.

What if? What if there aren’t any superheroes that look or act like you? What if, when you close your eyes you can’t see yourself in any of the stories or movies you have seen or read about. If you are a white able bodied male you probably won’t have that issue. It doesn’t mean you are bad person if you are a caucasian male. There are just a lot of caucasian able bodied heroes to choose from.

Every kid needs to be able to see them selves as that hero. In fact, everyone of us doesirregardless of age. No matter the color of your skin, your sex, your nationality there should be someone who is super that you can help change the world with when you become that superhero.

I never thought about this as much until I had a daughter that didn’t have a superhero with Down syndrome. We couldn’t find a doll that looked like her when she was a kid, she was different in everyone else’s eyes. In her eyes and in her heart she was just like everyone else and deserved to have that Idol, that hero. The superhero with Down syndrome , or in the wheel chair, or with autism?

There were certainly superhero’s with disabilities in the media, but these heroes were not really representative of the population they were mimicking. Just like having an able bodied actor play the part of the person with cerebral palsy or the character with the intellectual disability being played by the neruotypical actor, its not the same.

I want to tell a story, create a narrative. An imaginary world where people with different abilities, skin color, nationality, or sex are super. They need to be super in a way that is meaningful and real. I want people that truly emulate the population they represent so that a child can pick it up and close his or her eyes and see themselves doing amazing things.

One thing I have learned is that I don’t know what I don’t know. That sounds easy, but its not. You have to start with the premise you don’t know everything even if you feel like you should. I know my daughter but I am not her, I have to ask. I have to let her represent herself. I have to ask for help if what I am going to do it to be TRUE. I don’t know what I don’t know so I will ask I will ask for help, I will ask for input on character development and behavior. I will research character portrayal and vet my ideas with people who are part of the narrative. If this sounds like a contract its because in my mind that is exactly what it is. This is not just a blog this is my reminder to myself why I do this and how I have to be true to the people no matter what. Eximius is latin for Super. This project exists because its important that we all have someone when we close our eyes is like us and is making the world a better place, because one day, maybe that person won’t have to close there eyes for that dream to come true,..