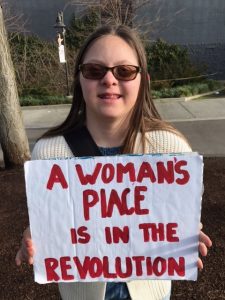 I grew up the oldest of two brothers. The only thing I knew about women was from books and television. Even I knew not to believe my friends. My mom was a powerful example of quiet strength who kept the family together physically and psychologically. Her opinion was so important that she didn’t need to punish me because the mere thought that she was disappointed in me would bring me to tears.

I stumbled through high school and College where I met my now wife of 26 years Susan, beautiful strong, equal parts. Sue inserted herself into my my mind and heart in a way no one can ever predict or prepare for. I was trying to get into medical school and the last thing on my mind was a relationship and here I was. Sometimes the best, most poignant moments of your life are absolutely unexpected and you just have to ride the wave realizing you don’t have control of everything. So, the next chapter of my life was unexpected and amazing.

Flash forward to my residency at the University of Michigan. Sue and I have now been married a few years, she was working, I was working and we have a little girl on the way. A few years later, she is working and I am working and we have another girl on the way. There is nothing that changes you more then love, that is except the love of a child. When you have a child something about your DNA literally changes. With my relationship with my wife, Susan, I became a better man, a better person. The sum of us was better then either individually. Sue has become part of who I was completely and totally. When you have a child you aren’t the sum of anything you are something wholly different. When you look at the world it looks different. When you have a child future means what is it going to be like for my kids, not what is it going to be like for me anymore.

When you have girls you look at the world for what opportunities it has for a woman. You want your girls to be successful and happy. Growing up in a family with only me and my brother we didn’t think about what opportunities women had. We knew my mom voted and worked, but we didn’t know she didn’t have the same opportunities as my dad. I had two girls and one with an intellectual disability. My girls deserved the same opportunities everyone else had, and now that fight was real for me. I am ashamed to say that it wasn’t before. Its not that I didn’t think my mom and wife should have everything they worked for, but you have kids, as I said, you look at the world differently, it changes you.

I have fought for the rights of women and people with intellectual disabilities for more then 22 years now. I believe part of the mark of being a man is an appreciation of how important women are. Any man who can’t say that isn’t a man or has lived in a box.

The 2016 elections have been hard on all of us no matter which side of the isle you are on. As a dad with daughters and a wife that I would do anything for, much of the rhetoric has been past my ability to comprehend. When the election was over it was very hard, just has it has been for many people. Watching the inauguration we all kept waiting for that message of togetherness, lets get past this, and when it never came we all felt hollow inside.

Until, until today January 21st 2016. I watched millions of women all over the world make their voice heard, in clear, poignant ways. Today I have hope, I have hope that diversity, inclusion, and Love will not be lost. That the president of the United States works for us, and most of us are women. I ,for one, can’t imagine a better person running the world then my mom, my wife or one of my daughters.

In 1920 a woman’s right to vote was established in our country. My epiphany is that on the 100th anniversary of a woman’s right to vote women who are the majority and the backbone of our great country and world will be able to determine the course. I truly believe that this is a wake up call to the world that hate, bullying, and lying will only get you so far. Without a foundation you cannot build a structure worth anything. Woman are the foundation of our society and without them our nation and our world will never achieve greatness.