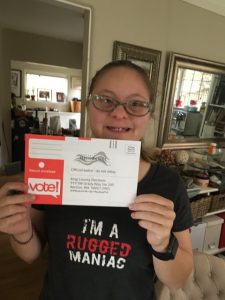 My daughter, Devon, who is now 20 years old was able to vote in her first election this year. Devon has always been treated like her siblings and raised to be independent. There will always be some things that are harder for her. Despite the fact that she has Down syndrome, she is in charge of her own life and is most frustrated when people have low expectations of her.

Devon has followed the election closely reviewing the candidates and talking to us and her friends. Early this year she decided emphatically that she would support Hilary Clinton because Secretary Clinton seemed to emphasize the issues that were important to her.

As we all know the election did not turn out as planned. Hillary lost, but instead of being devastated we talked about US politics and how Devon’s words could be used. Devon wanted to make a statement about the world as we saw it and what she expected in a president. Devon is an amazing public speaker so I agreed to help her craft a letter.

One of the things Devon wanted to say was how she didn’t want to be “forgotten”. She didn’t want the needs of individuals with intellectual disabilities to go unheard, a diverse group of people who are often overlooked and under appreciated.

Devon’s concern wasn’t just for people with intellectual disabilities, it was for all of the people whom she perceived were demeaned through the course of the presidential campaign. Sometimes finding words to describe a very important thought can be very challenging. We often instinctively know what we are trying to say, but the words fail us.

After much discussion we finally came up with a word, “disenfranchised”. We knew it was the word we wanted, especially after researching what it really meant. Our research included a dictionary and a google search, then a history lesson.

Disenfranchised, when a marginalized group is deprived of rights. We talked about the history of women getting the right to vote and what it means to be marginalized. There are many groups in our country who have felt marginalized based on their race, sex, religion or orientation. One word that marked history for so many helped Devon understand why her words are important and that irregardless of the outcome, her vote is important.