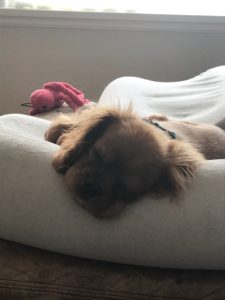 Sometimes things that have a great effect on our perception of the world come in unexpected places. I know I have said this before, but I am still shocked at how profoundly this affected me last night. After a busy week it was nice to sit down on a Friday night and just relax. The dogs were walked and a puppy was sitting comfortably in my lap, so I put my feet up and turned on the television. The first channel that came up was an early audition episode of this year’s America’s Got Talent. I started watching last year out of curiosity and was genuinely surprised by some of the amazing and interesting individuals who tried. It suffices to say it was fun/harmless entertainment.

Most of the acts were fun, but certainly something that would be easy to turn off as it was getting close to bedtime, which is embarrassingly early for me. The last performer was a young lady named Mandy Harvey. She was a 29-year-old woman who lost her hearing at the age of 18 when she was in music school. Mandy had to drop out when she couldn’t hear well enough to even take the tests and now was absolutely deaf. She suffers from what she describes as a connective tissue disease that affected the nerves from her ears. The reason this is important is that if you don’t have the nerves, there is no signal. You can’t hear anything; it’s the difference from turning the radio off or turning it way down. It was of course tearful to watch the story unfold as she talked about crushed dreams and not even remembering what her dad’s voice sounded like. Singing since the age of 4 and trying to make music and sound your entire life, just on the cusp of that you lose all of your hearing.

It is certainly not that there haven’t been cliché stories (also often wonderful) about something terrible happening then overcoming those odds. One of the movies I always remember was about a figure skater that lost her vision in an accident, but was able to overcome her visual impairment and skate again. We have all witnessed amazing things of people who have overcome great disabilities only to become stronger in other ways as a result of it.

What happened next made it different for me. She sang, I was expecting something like that, but she really sang, and did it beautifully. After being stunned by her ability, it sunk in. She was really able to sing in a way that touched others, but she couldn’t hear a single note, not even a hint of a note. She spent years figuring out how to use electronics to match her muscle memory to what the device was telling her. She loved the “memory” of singing so much that she did it for the love of it, knowing that she herself could never enjoy it. At least not in the way she had previously.

Instead of giving up and moving on to be creative in some other way, she found a way to do it. Like a painter going blind who continues to paint… In the emotion of the moment it’s easy to lose the gravity of the meaning of this. How many things in your life do you love so profoundly that you would continue to do that just for the memory of it, knowing that you could never actually experience it again? Not just that, but remember this was a music student who knew what good and bad music was. She was not just creating, but putting herself out there with no way to know if what she was doing was good or bad. Having the faith and the strength to know it didn’t matter as much as the act of doing it and being OK with however it turns out.

Everyone should have something that fills their soul like that. Something, that the mere thought of would give you hope that no matter what its all worth it. When we look at our children the thought of them can fill us with a joy that you really can’t describe, but you will always recognize that feeling even if your kids are across the world from you.

Everyone has bad days; we all have things in our life that are difficult. On those days what is it that keeps us going? We have talked before about support and inspiration. Sharing with each other so that we have a united front. At the heart of everything, it’s having hope that keeps us grounded. My last blog I wrote about HOPE. If hope is the dream that you see when you close your eyes, then this kind of love is the engine, the power plant that gives you what you need to get in your car and drive. Having a dream is only part of it, you need energy. A road map without transportation is a terrible thing.

Do me a favor, watch this clip https://www.nytimes.com/2017/06/08/arts/television/americas-got-talent-mandy-harvey-deaf-singer.html?_r=0
then think about what it is in your life that fills your cup to keep you going. What is it that you love so profoundly that the mere memory of it is enough to keep you fighting even if you will never enjoy it again? If you are fortunate enough to be able to answer that, wonderful, it’s not easy. It sounds like it should be, but its not.

I am still struggling to answer this myself. I love my family, without them there would be a hole that would suck all of the light out my current existence. What in my life do I love so much, excluding the obvious as mentioned above, that I would do what Mandy did, or at least try to. This is at the heart of what I think about when I try to understand what RaiseExpectations is all about.

The interesting truth is that Mandy’s loss was the gain of everyone who listens to her. Her music is like Santa clause giving everyone gifts that he can’t see. He doesn’t even know what any of these gifts are. Then he watches as all of those people he gave gifts, enjoy their presents so he knows what he did is worthwhile.